The majority of ships traveling between the stars are not warships, but rather craft operated by governments or commercial groups doing the work of logistics and movement of people for economic reasons. 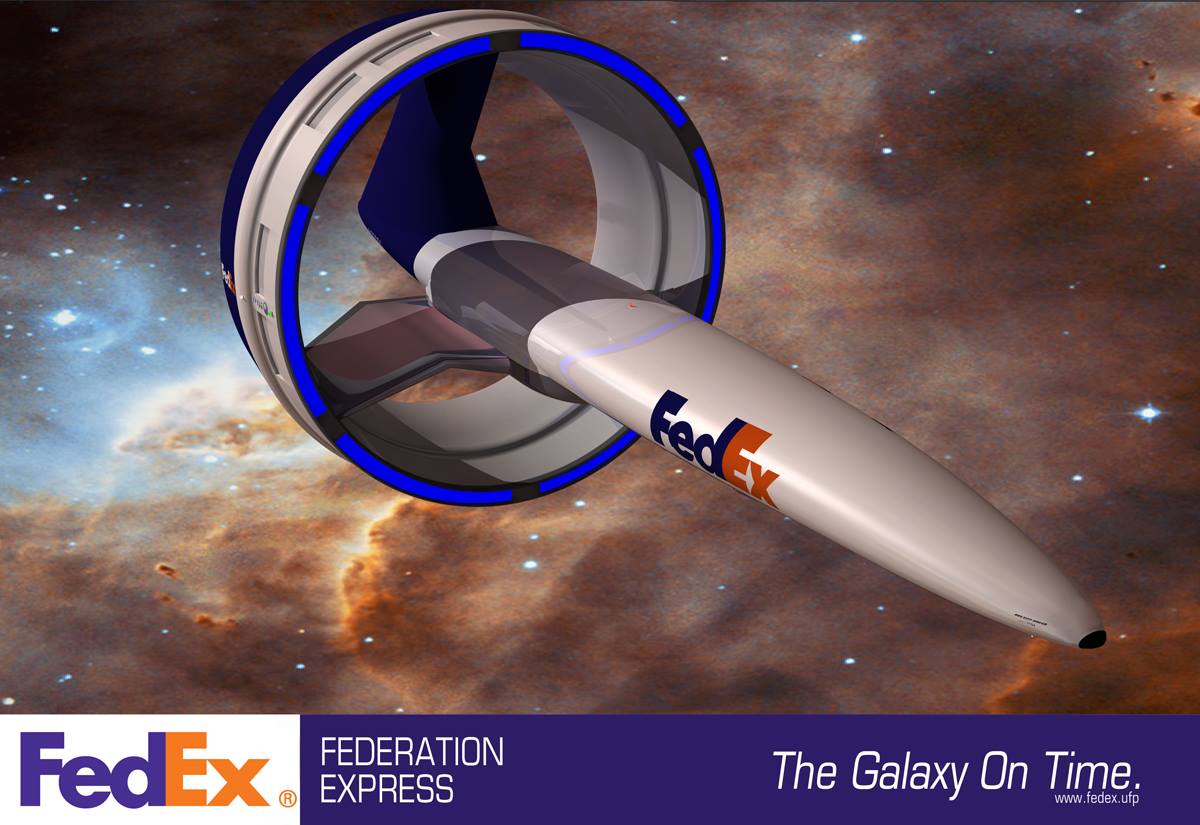 In some cases specialty freight is cheaper to produce in one star system and move to another system where it is used, but intra-system freight is even more common, where one planet might have an abundance of resources that are rare on another world. Freighters are the workhorses that do all this moving. There are freighters that carry the freight internally and others that carry pods or containers attached to the outsides of their hull. Most freighters are slow and unmaneuverable with only the weapons systems that might be necessary to fend off pirates that operate in the regions—since any of these ‘extras’ like speed or weapons might cut into the profitability of moving cargo. Of course specialty freighters exists, where fast-freight is important or for high-threat areas, they might bristle with weapons, but star systems served by these types of freighters will be paying premium prices for imports.

These are usually larger vessels, usually faster than freighters, which specialize in hauling people instead of goods. These may be ‘commuter’ liners like the route between Earth and Vulcan or ‘sightseeing’ liners which have luxury accommodations and take interplanetary elite to see the sights of interesting nebula or visit recreation destinations such as Risa.

These ‘dry docks’ can be stationed either in planetary orbit or in deep space, some few are even warp capable and can move as needed without extensive assembly and disassembly. Most are cage-like in design with the ship being worked on being engulfed by the superstructure of the repair facility. Some races, such as the Klingons and Romulans fortify their repair facilities to protect defenseless ships under repair.

These ships range in size and capabilities dependent upon their mission and the economic resources of the group or government that supports them. Starfleet regulations require their research vessels have at least one weapon system, but they rarely have more, instead dedicating their space, power, and crew assets to labs, computers, and sensory suites.

These small vessels are not warp capable and come in both atmospheric capable (for moving between planetary surfaces and ships in orbit) and space-only designs. They also function as lifeboats in case of emergency. They are usually unarmed, but several races are experimenting with new small craft focused on short-range combat.

Although full-scale invasions are not conducted on a regular basis, when they are, warships are unsuited for carrying large numbers of ground troops. Troop transports generally rely on escorts for defense, so they are not heavily armed themselves, but instead of an impressive array of shuttlecraft, dropships, and large-scale transporters capable of beaming down an entire platoon at once. As one might guess, the Klingons are the galaxy’s foremost builder of troop transports.

These mixed-utility vessels are built to move ships that can not move themselves, move cargo containers, move starbase modules into deep space, or even serve as ad hoc specialty craft by carrying pods outfitted with special labs or facilities to achieve any mission anywhere. The Starfleet Corps of Engineers is very proud of their growing fleet of mixed-use tugs and the growing number of missions they can accomplish with them.

These small craft serve as shuttles for extended distances where sub-light travel would be impractical. Generating warp fields with equipment small enough to be considered a ‘shuttle’ is very expensive so the use of warpshuttles is quite limited until late dates in the Star Trek timeline.

These ships are bigger than shuttles, but considerably smaller than liners they are used by private entities as scouts or couriers, or even as personal pleasure craft for the fabulously wealthy. Flag officers are often assigned a small craft called a yacht used for moving between commands or touring visiting starships and are functionally quite similar to the civilian version, but by regulation, will have at least one weapon system for defense.

These are the basic types of war ships which are fielded by the known races in the galaxy. They are listed from smallest to largest.

These are small patrol craft used to provide defense around planets and installations. Since they never travel away from their posting, these ships rely on powerful sublight drives and do not have warp drives.

A cutter is a small craft used for in-system patrols that take them away from the immediate area of their installations, therefore they are equipped with warp drive, although it may not be very powerful. They are often used in anti-piracy, rescue, and system defense roles.

More robust than a cutter, the corvette was traditionally considered to be the smallest class of rated warship. These ships will have a warp-drive capable of interstellar travel, but the cargo space and living quarters aboard corvettes make them unsuited for particularly long journeys. They are often used as escorts for unarmed vessels in dangerous areas.

Frigates in the time of sail were fast and maneuverable warships which were heavy enough to exchange fire with the line, but agile enough that they could choose not to. In the time of Starfleet, frigates serve as miniature cruisers, packing multi-role ability into their smaller spaceframes, they are the economical choice for places where Starfleet might not be able to afford to send a cruiser or for places where threat levels do not require the heavier vessels.

Scouts are small to medium-sized vessels used to gather sensor data and report back either military or scientific data. Sensors and engines are important to scouts, with communication equipment also being a priority. Some scouts are used for survey missions and might have significant science and computer capabilities, while others are built for military operations and will instead of more weapons and protective measures.

An escort ship is designed to protect larger ships and transports en route in deep space or while they are at port from enemy actions. Specialized sensors and weapons arrays are the focus of the escort type as are their shields which are important when they put themselves in the line of fire.

Destroyers are medium-sized craft purpose-built for the destruction of enemy starships and screening important military assets. As such, weapons, sensors, and engines will be the priorities of destroyer-type vessels, with little thought going to scientific efforts or crew comfort.

Size Class: IV
Crew Complement: 200 – 300 (The New Light Cruiser program of the 2260s lead to a great deal of automation with a crew of 25 – 50 on NCL ships)
Starfleet Class Identifier: CL, NCL
Commanded by: Commander or Captain

Heavy Cruisers or just cruisers are the main capital ships for most space fleets, they are powerful enough to operate independently away from home bases in less dangerous time or they can come together in battle groups in time of war. Starfleet enjoys a multi-role approach to cruiser design attempting to make the class the best of all worlds, with scientific capabilities and military capabilities complementing one another. They usually have sufficient ships’ stores to make long journeys past the frontiers of controlled space.

The battle cruiser is a purpose built destroyer of other capital ships, no space or energy is wasted on efforts not directly tied to protection of the spaceframe or weapon systems. They are not necessarily bigger than Heavy Cruisers, but their focus on weapons and shield means they will always have an advantage in tactical situations.

The design goal behind a dreadnought is to invulnerable to the attacks of lesser vessels while being able to destroy other ships of its class. Not all species have the capability to build such impressive vessels, with Starfleet not launching their first dreadnought until the 2270s.

Size Class: V
Crew Complement: 450 – 650
Starfleet Class Identifier: DN
Commanded by: Captain; however, a Commodore or Rear Admiral may be aboard who commands the entire battle group the dreadnought is a part of.

The theoretical battleship is the logical conclusion of the dreadnought arms race, where ever more impressive ships are used to ‘one-up’ other navies in the quest for supremacy. It would take the entire economic output of several worlds several years to build such a vessel, so their very existence may turn the tide of a war just due to the economic strain they put on a government.

Size Class: VI
Crew Complement: 1,000 – 3,000
Starfleet Class Identifier: BB
Commanded by: Captain; however, a Rear Admiral, Vice Admiral, or Admiral may be aboard who commands the entire battle group the battleship is a part of.

Although theoretical, carriers might be produced if a period of general war were to sweep the Alpha and Beta Quadrants. These massive vessels rely upon dedicated small craft to deliver powerful payloads to distant ships, theoretically keeping the carrier at a safe distance from battle.

Size Class: VI
Crew Complement: 3,000
Starfleet Class Identifier: CV
Commanded by: Captain will command the ship, the fighter wing may be under the command of an additional Captain, with the battle group commander who is a Vice Admiral or Admiral also being aboard.

You can join one of my games or even request I GM a game for you by visiting StartPlaying.Games